Endometrial cancer is a tumor that occurs in the uterine, and it is the fourth top common cancer for women. Each year, about six thousand people in the United States are newly diagnosed with endometrial cancer.

The current treatments for endometrial cancer include radiation therapy and chemotherapy. However, inevitable side effects and toxicity occurring in these two treatments have been propelling scientists to explore more friendly and less toxic herbal medicines.

Ginseng is one of the most popular medicinal herbs being studied among the research society, for it shows good anti-cancer activities.

Ginsenosides, the main pharmacological contributors in ginseng, have been reported to potentially inhibit and kill various cancer cells in lab and animal experiments.

20(S)-protopanaxadiol, also referred to as 20(S)-PPD or aPPD, is a metabolized minor ginsenoside. It showed brilliant anticancer activities, dozens of times stronger than its parent ginsenosides Rb1. 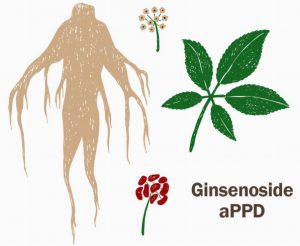 A research team examined the anticancer effects of ginsenoside aPPD on endometrial cancer, and the findings were published in the Journal of Ginseng Research.

The researchers of the study found that ginsenoside aPPD treatment inhibited the proliferation of endometrial adenocarcinoma cell lines (HEC-1A) in a dose-dependent manner. Ginsenoside aPPD.

Both cell culture and animal experiments showed the therapeutic potential of ginsenoside aPPD in the treatment of endometrial cancer, and ginsenoside aPPD could be used for combination therapy in the coming years.