Epidermal growth factor receptor (EGFR) is a protein present on the surface of both normal cells and cancer cell and overexpression of EGFR is associated with the development of a wide variety of tumors.

It is estimated, in non-small cell lung cancer (NSCLC), that overexpression of EGFR or mutations in intracellular EGFR accounts for 43-89% of cases.

One of the methods to prevent the growth of EGFR-expressing tumors is to inhibit intracellular tyrosine kinase activity.

Epidermal growth factor receptor tyrosine kinase inhibitor (EGFR-TKI) is an effective first-line treatment currently used to treat lung cancer with EGFR mutation. Despite efficacy, it can cause side effects like rash, anorexia, nausea, diarrhea, etc, and scientists have put a huge effort into exploring better alternatives.

Ginseng is a traditional Chinese herb that has been used as a tonic to treat various ailments like colds, memory loss, and liver disease over two thousand years. 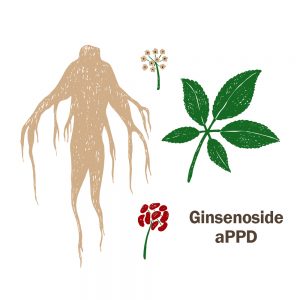 The health benefits of ginseng are attributed to its main pharmacologically active ginseng saponins, known as ginsenosides. Ginsenosides have shown to exhibit antioxidant, anti-inflammatory, antitumor, immunomodulatory activities with low toxicity.

Recent studies have indicated the potential use of ginsenoside as an EGFR inhibitor to suppress tumor growth and progression.

A study published in the journal Food and Chemical Toxicology found that 20(S)-Protopanaxadiol, known as ginsenoside aPPD, could block cell cycle progression in lung cancer cell A549 by targeting EGFR.

Ginsenoside aPPD is a metabolite of ginsenosides and shows stronger bioactivity than some well-known ginsenosides like Rh2 and Rg3.

The study suggested that ginsenoside aPPD can be potentially used as an EGFR TKI to treat lung cancer with an EGFR mutation.

Given that ginsenosides have well-known antitumor and antiangiogenic activities and can down-regulate the expressions of EGFR, could EGFR-TKI plus ginsenosides exert combined effects?

Drug resistance serves as a barrier that limits the therapeutic effects of EGFR-TKI in lung cancer treatment. The researchers of the study wondered that a combination of EGFR-TKI and ginsenoside Rg3 could delay the acquired resistance of EGFR-TKI treatment.

A total of 124 patients with advanced NSCLC and EGFR active mutation were recruited and randomly assigned to group A or group B. Patients in group A were treated with EGFR-TKI plus ginsenoside Rg3 at standard doses, while individuals in group B received EGFR-TKI alone. The median follow-up period of the study lasted about 22.9 months.