Ginseng is one of the most popular herbs around the world. Traditionally originating in East Asia, ginseng has gained huge popularity among western people since it was introduced to western countries.

People love ginseng because it has many health benefits. Ginseng could help: 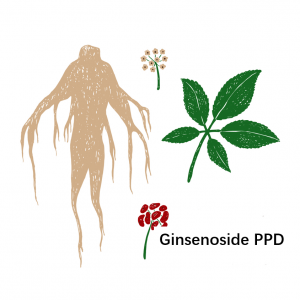 The medicinal benefits of ginseng are derived from pharmacologically active compounds, called ginsenosides. To date, about 100 ginsenosides have been isolated and identified. Some well-known ginsenosides include Rb1, Rb2, Rg3, Rh2, and Rg1, Rg2, and Rh1.

Ginsenoside Rg3 and Rh2 are well-known ginsenosides for their early practical use in promoting human health. For example, ginsenoside Rg3 is already listed as a new anticancer drug in traditional Chinese medicine in China and widely used in the treatment of different types of cancer.

A recent study published in the journal Cell Death & Disease found the antitumor effects of ginsenoside PPD and its possible mechanisms. One finding of the study is that ginsenoside PPD has the best antitumor activities than other four ginsenosides, Rh2, Rg3, Rg5 and Rh3.

The study result showed that all five ginsenoside monomers showed inhibitory effects on the proliferation and migration of each tumor cell line in a time-dependent manner.

Typically, the half-maximal inhibitory concentration (IC50) of ginsenoside PPD was about 70 µM, lower than that of other monomers, which means that ginsenoside PPD had the best inhibitory effects on the cell viability of each cancer cell line.

Similarly, when it comes to the migration inhibition test, ginsenoside PPD also showed the lowest migration rate in all cancer cell lines, and its migration rate was as low as 37% in PLC/ PRF/5 human liver hepatoma cells.

The study result suggests that ginsenoside PPD may be a more promising anticancer agent, for it exhibits more potent antitumor activities than Rg3.

To answer this question, we should first understand the difference between prototype ginsenosides and rare ginsenosides.

It was found that, compared with prototype ginsenosides, rare ginsenosides are more bioactive with better membrane permeability and bioavailability due to fewer sugar moieties.

Ginsenosides Rg3, Rh2 and PPD are all rare ginsenosides. Noticeably, ginsenoside PPD is a metabolite of ginsenoside Rg3 or Rh2, so it usually presents better bioactivities, antitumor properties included.