Ginseng is a traditional medicinal herb renown as a popular healing remedy in East Asia over a thousand years. Known as the King of the herbs, it has been widely as a biological natural medicine in the west to help treat fatigue, stress, aging, and chronic diseases and immune disorders. 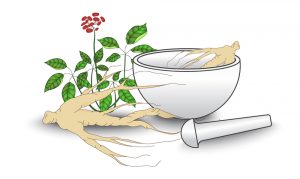 Ginsenosides are active ingredients in ginseng and responsible for dozens of health potentials of ginseng. A variety of pharmacological properties have been reported, including anti-diabetes.

Diabetes is a metabolic disease characterized by over high glucose levels. The cause for diabetes is either insufficient production of insulin or insulin resistance.

Ginsenosides show huge potential in blood sugar regulation and are considered a potential agent for treating diabetes. The possible mechanisms of ginsenosides on diabetes, reviewed by a 2018 study published in the journal Frontiers in Pharmacology, includes:

Among the various ginsenosides Rg1, Rg3, Rb1, and Compound K were found to exert the most promising antidiabetic effects in cell and animal studies. This is perhaps owing to their high bioavailability.

In a critical trial, ginsenoside Re was not detected in human plasma after treatment, which led to the failure in relieving diabetic symptoms.

Human gut microbiota plays an important role in the absorption of ginsenosides, and they help break high-molecular-weight ginsenosides down into metabolized rare ginsenoside that can be easily absorbed and utilized by human bodies.

Nanotechnology is a promising drug delivery tool to increase the bioavailability of ginsenosides. A study found that ginsenoside Rg1 nanoparticle could promote the migration of cerebrovascular endothelial cells and penetrate the blood-brain barriers in high concentration in treating diabetic cerebral infarction.

Rare ginsenosides like Rh2, Rg3, Rk1, Rg5, aPPD are available in the current market, and excitedly there is a brand featuring sixteen rare ginsenosides in high concentration.