Ginseng is a popular herbal medicine in the world and the American Society of Clinical Oncology (ASCO) believes that ginseng could be selectively offered to individual patients with breast cancer to help with treatment-related fatigue.

Here are 8 things you should know about ginseng.

1. The active ingredients in ginseng

Ginsenosides are active ingredients in ginseng, which are responsible for a variety of pharmacological properties of ginseng.

Having known as a natural remedy for more than two thousand years in the East, ginseng has many potential health benefits, including: 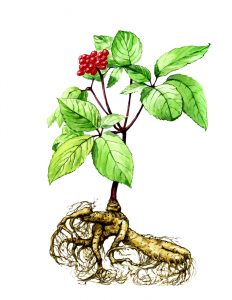 4. The most valuable part of ginseng

In addition, the ginsenoside compound also changes with ages.

Depending on the different originations, ginseng has many species. Panax ginseng, known as Asian ginseng grows in the mountains of Eastern Asia while American ginseng is native to eastern North America.

Fresh ginseng is non-dried raw ginseng, and the ginsenosides contained in fresh ginseng are low bioavailable and are difficult to be absorbed by human bodies.

White ginseng is peeled and dried ginseng without being heated. It is believed that white ginseng has less therapeutic constituents due to air-dried processing in the sun.

Red ginseng is steamed and dried ginseng. Red ginseng contained larger amounts of ginsenosides than those in fresh ginseng and white ginseng.

Researchers found that ginsenoside contents in red ginseng varied under different extracting hours. The content of ginsenoside Rg5 and Rk1 reached its peak when extracted for 36 hours, while the content for 20S-Rg3 +20R-Rg3 and Rk1+Rg5 peaked at 24 and 36 hours, respectively.

However, the problem is that not everybody has the right gut bacteria, and around one-fifth population lacking in specific gut bacteria can not benefit from ginseng and ginsenosides.

Rare ginsenoside can also be obtained by processing methods like steaming or acid transformation. For example, 20(S, R)-Rg3, knowns as unique ingredients in red ginseng, can be newly generated during the steaming process.